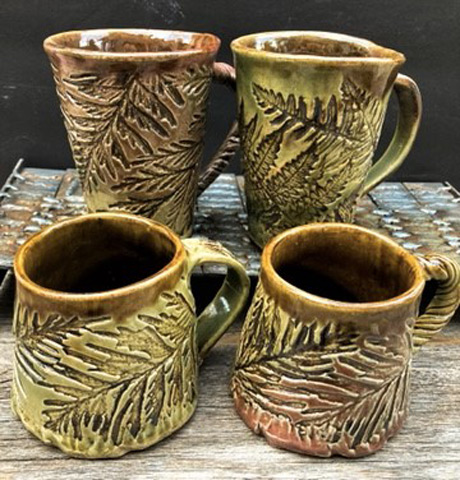 I grew up making mud pies. As a child I was constantly creating masterpieces in my sandbox by day and coloring "out side the lines" in my color books at night. Still "mud-minded" I studied ceramics at the University of Puget Sound, graduated with a BFA and later received a MFA from Whitworth College. In 1972, I established the Clay Fox Pottery and happily became a studio potter with my hands in mud ever since!

Raku fired pottery has been my current love for the last 8 years. Rooted in the Zen philosophy of simplicity and a harmonious interaction between all things, raku to me is a coming together of clay, fire and soul. The process involves brushing a clay pot or slab with a metallic glaze, placing it in a small kiln and firing it to about 1800 degrees. This is a "low fire" temperature compared to most pottery and leaves the clay itself still very porous. The pot is then removed with tongs while it is red hot and placed in a garbage can full of newspaper that instantly ignites. Raku is the sport of pyromaniacs! The flame and smoke bring out the lusters in the glaze and turn the exposed porous clay permanently black. Depending on the dancing flame, each piece is uniquely different. I like the interaction that happens between my work in clay and the spontaneity of the flame... a true spiritual merging of potter, clay and fire.

I look forward to welcoming you to my studio on the banks of Peone Creek in the Little Spokane River valley and showing you my current line of work. Nature, my life long teacher, has inspired me with leaf designs that start out so temporary and then are preserved forever as impressions in clay.